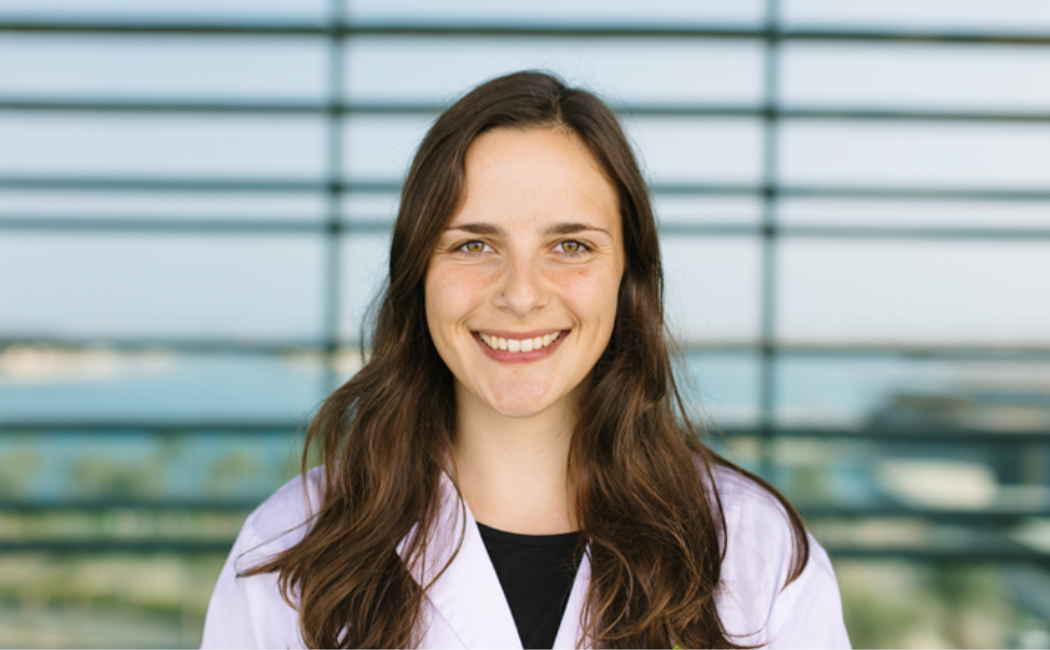 Inês Raimundo, a PhD Student in the Marine Microbiomes Lab at KAUST's Red Sea Research Center, has a deep fascination with marine microorganisms, and believes these tiny organisms could play a key role in saving coral reefs.

Inês Raimundo has always wanted to be a biologist and completed her undergraduate studies in Biological Science, followed by an MSc in Biotechnology, at the University of Lisbon, Portugal. For her master’s thesis, she studied the microbiome of soft corals and how their associated bacteria are able to degrade chitin, one of the most important polymers found in nature and the key structural component in arthropod exoskeletons, mollusk shells, fish scales and the cell walls of fungi. While studying at the University of Lisbon, Inês worked as a part-time lab technician in a food safety lab, as a Divemaster Assistant at the Lisbon Diving School, and was the lead author of a review article that lists all current known biochemical compounds produced by coral-associated bacteria, outlining their potential importance for humankind.

Inês's fascination with the micro-world started when she realized she could combine her passion for the underwater world, especially corals, with what she was learning in her undergraduate studies — particularly, the vast and unknown world of bacteria.

"Microorganisms tend to be rather underrated," says Inês, "yet they are the most abundant and diverse group of organisms in the entire planet. In the ocean, these tiny organisms play a key role in biochemical cycling and ecosystem functioning", she explains.

The focus of her PhD is to develop a probiotic cocktail, made with a consortium of bacteria that play beneficial roles in coral health, that can be used to inoculate corals from the Red Sea to boost their immunity and protect them from bleaching, and ultimately prevent them from dying. Her research expands on previous laboratory experiments pioneered by her PI, Professor Raquel Peixoto, that were successfully conducted on corals kept in tanks; but they will now be taking it to the next level by conducting field experiments on site, in the Red Sea.

"Our research is of great importance to the marine science field because we can potentially and hopefully prevent mass bleaching events all over the world, and protect and save coral reefs from extinction," Inês explains. "This will not only save the corals themselves, but also all the organisms that live and depend on reefs for food and shelter."

However, Inês acknowledges that her and her team cannot achieve this alone. Multidisciplinary research studies are needed, and will certainly be conducted, if preliminary results are as promising as they expect. This is a mega project and a project of this size needs to draw on the expertise of scientists from a wide variety of scientific fields to ensure it is being done correctly, and to make it efficient and possible at a large scale, says Inês.

"We need oceanographic analysis of sampling sites to see, for instance, how the currents influence the spread of our cocktail," Inês explains. "We will also need engineers working with us in order to find the best, environmentally-friendly and lasting system to deliver these probiotics to single colonies, and eventually, entire reefs."

Inês is excited about the potential contribution her work could offer to marine conservation and ocean management.

"This research can change everything! We are used to seeing documentaries of corals dying all over the world. If you are a diver, like me, you can see it with your own eyes and it is heartbreaking," says Inês, adding: "We have a chance here to make a difference."

Changing this scenario and saving these amazing creatures offers both environmental and economic that will not only benefit the marine environment, but will ultimately also benefit humankind. Healthy reefs provide recreational (diving, snorkeling, etc.) and tourism opportunities, support intricate marine food webs, serve as nursery grounds for important seafood species, and protect coastal communities from storm surges.  Unravelling the intricate relationship between coral and their symbiotic bacteria can help the pharmaceutical industry to develop products, such as reef-safe sunscreens, that are not harmful to corals and will make them less susceptible to bleaching. There is also potential for the biotech industry to study bacterial communities that are known to be beneficial to corals in order to identify new compounds and metabolites — for example, those that have antibacterial, antiviral, anti-inflammatory, antimalarial or anti-carcinogenic properties — that can be used in pharmaceutical drugs and medicinal treatments. These tiny marine microbes offer enormous potential for growth of the blue economy, and therefore warrant further research.

When asked about her future plans, Inês says: "For now, I still have a long journey to finish my studies and my research on this topic. But after that, I hope I can continue being a microbiologist of the sea, and find new and promising ways of using the amazing traits and skills of bacteria to try and save corals."